Stem rust, a disease that once caused major yield losses in the Great Plains, has been effectively controlled with genetic resistance for decades. There hasn’t been a major outbreak since the 1980s; however, this base of genetic resistance has eroded considerably in recent years.

Although the spotlight is on western Kansas for its large number of acres planted to susceptible varieties, it isn’t the only region DeWolf is concerned about. Ten percent of central Kansas acres are also planted to stem rust susceptible wheat varieties.

Kansas is not alone in this recent trend toward growing stem rust susceptible varieties with the acres planted to susceptible wheat varieties also increasing in Colorado, Oklahoma and Texas. The increased susceptibility of wheat in Texas is particularly important. The rust disease of wheat often survives the winter in parts of Texas and Mexico.

“Once the disease gets established in northern Texas and southern Oklahoma,” DeWolf said. “They are often moved north by storm systems into our area.”

Past stem rust outbreaks in the Great Plains were triggered by a small area of susceptible wheat planted in Texas.

“We’re well beyond just a few acres now. This is not just one grower that is raising susceptible varieties. The risk could be much greater now than most growers in the Great Plains have experienced in over 40 years,” DeWolf said.

Unfortunately, as long as growers continue to plant susceptible varieties, the threat will continue to grow.

DeWolf said Kansas isn’t the only area in the world experiencing the threat of a stem rust outbreak. Western Europe, the United Kingdom, Germany and Sweden have all reported increased activity of stem rust, after not seeing the disease for many years, like the United States.

In the future, growers should focus on varieties that are well adapted to their region, but also have a strong resistance to the disease.

“I would encourage growers to try and avoid planting highly susceptible varieties where possible,” DeWolf said.

Growers can find information about stem rust susceptibility in K-State’s Wheat Variety Disease and Insect Ratings Guide. Varieties with ratings of 8 or 9, indicating a high level of susceptibility, should be avoided.

Speaking of more immediate solutions, DeWolf says if there happens to be a stem rust outbreak this growing season, a fungicide treatment could help reduce the yield losses caused by the disease. Adding stem rust to the list of problems already affecting wheat production in Kansas will likely increase the cost of production and complicate the management of other diseases.

For example, the timing of fungicides to control stem rust is often later than it is for many other foliar diseases of wheat. Fungicide applications optimized for stripe rust control may not provide enough protection against stem rust.

If you are looking for varieties that fit well in western and central Kansas, all K-State wheat varieties have solid resistance to stem rust. Some of the more notable ones include Larry, Tatanka, Joe, Zenda, KanMark and Oakley CL. 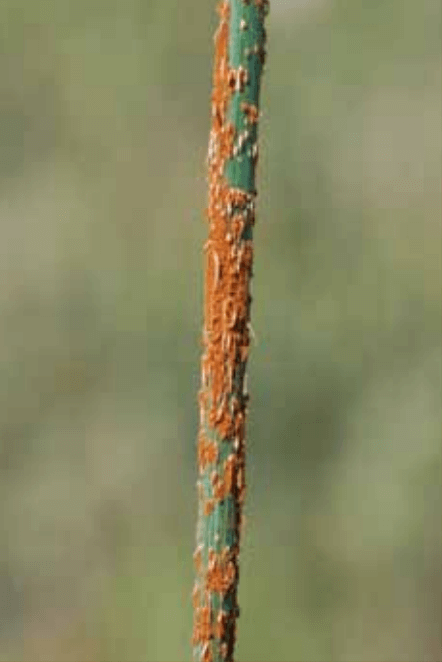 Facebook0Tweet0
Winter Durum in Development for Western Kansas Wheat growers in western Kansas may have an opportunity in upcoming years to grow durum… Read More Test wheat seed for head scab Kansas, along with numerous other states across the United States, was dealt severe rainfall and… Read More